The Marriage of the Sea Ceremony in Venice

The Marriage of the Sea Ceremony in Venice

Another very ancient tradition, dating back to around the year 1000, is “The Marriage of the Sea”.

The Doge, at the head of a solemn procession of boats, sailed across the lagoon to reach the Lido port. In front of the San Niccolò Church, the patron saint of sailors, the Doge’s head was sprinkled with holy water and a prayer was recited so that the sea would be merciful to Venetian sailors.

As a commemoration of the” Marriage of the sea”, the ceremony is now performed by the Mayor of Venice, between the end of April and the end of May, depending on when Easter is celebrated.

He crosses the lagoon aboard the “Bissona” (a ceremonial barge), followed by a procession of boats and reaches San Niccolò Church, where he throws the ring blessed by the Patriarch into the sea.

In the Saint Mark Basilica, in Venice,  a ring found in recent times is kept as evidence of what has been narrated about this ancient ceremony.

In case you decide to partecipate to this event, please contact us as soon as possible. 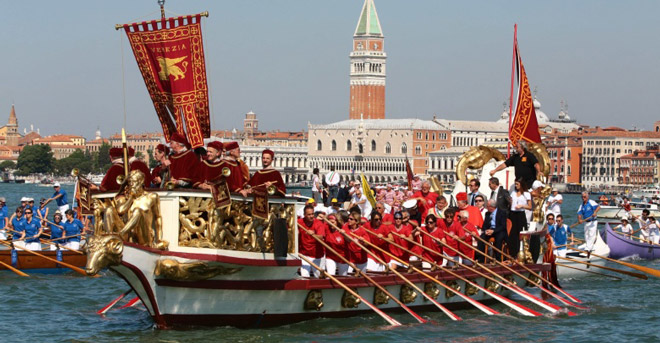