Campo Sant’Angelo is located in the historic center of Venice, in the San Marco district.

Buildings of historical architectural importance overlook it, such as: Palazzo Trevisan Pisani, Palazzo Gritti Morosini, Palazzo Duodo, and the Monastery of Santo Stefano.

On the western side, there is a small Oratorio dell’Annunziata, wanted by the Morosini family in the 10th century.

Where there is the Monastery of Santo Stefano (today headquarters of the Agenzia delle Entrate), there was also a church of San Michele Arcangelo and the annexed bell tower. This one had a somewhat eventful history. It collapsed for the first time back in 1347 due to a violent earthquake.

It was rebuilt but in 1445 it was noticed that the bell tower was beginning to lean towards Campo Sant’Angelo giving the idea of ​​falling.

An architect from Bologna, Bartolomeo di Fioravante known as Aristotle, intervened to remedy the situation. He began to dig on the opposite side of the slope so that he could regain the original stability. After only one night it fell, partially destroying the church and the nearby monastery.

Sant’Angelo Square in Venice, full of history and content, hosts another building dating back to the 15th century where four luxurious apartments are located. Ca’ Sant’Angelo apartments is a small company managed by a Venetian entrepreuner since 2004.

They are all on the second noble floor of this building, whose common feature is that they have high ceilings over 4.5 meters. They are furnished with a kitchen, washing machine, dishwasher, and smart TV. They are provided with sheets, towels, bathrobes, slippers, shower gel, shampoo, and body lotion.

To complete your possible stay, you will find in the same building, on the ground floor, a refined restaurant, Sant’Angelo, which will let you taste the typical Venetian fish dishes.

See you soon in Campo Sant’Angelo in Venice 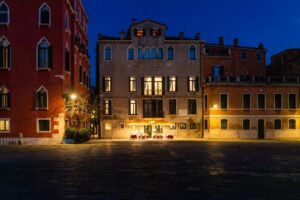